When Perth City Railway Station’s operators needed to refurbish the floor of its upper level concourse, they realised that this was an opportunity to not just create a functional surface – but to enrich the station with a work of art under their customer’s very feet!

The multidisciplinary contemporary design studio Donaldson and Warn designed an eye-catching new surface that mirrored the station’s interconnected network of tracks, cables and lights. The new floor would consist of long, straight bands of different lengths and various colours, running alongside each other up and down the concourse area. When designing the floor, the oil painting technique of underpainting was employed, using complementary colours to enrich the depth of the floor’s aesthetics.

The size of floor space that needed coating meant that when complete the station would have created one of Australia’s largest pieces of public artwork!

How do you Create Art Underfoot?

However, this ambitious plan threw up several practical issues. Namely, how could they create a stunning, colourful and vibrant floor finish that would retain its appearance in the face of 60,000 daily commuters and how could they install artwork like this without closing down a key part of the site for long periods of time?

The floor finish had originally been floor tiles, but these had continuously cracked and moved when faced with the site’s daily activity – so tiling again was out of the question. A robust, rapidly applicable material was required that could be laid down in the desired pattern. To further complicate the specification process, the nature of the building meant that the floor finish also had to be slip resistant.

The synthetic quartz system Flowfast Quartz Scatter was chosen as the medium through which the art would be applied onto the substrate canvas. This seamless resin flooring solution was ideal for the task at hand, as it could be supplied in a bespoke palette of colours and thanks to its fast curing, methyl methacrylate (MMA) enhanced formulation the entire floor could be installed over night, minimising disruption to travellers.

Now Perth City Railway Station’s thousands of daily visitors can enjoy a bright and vibrant interior when they’re going to catch their train or when alighting into the city – and the building’s operators can rest assured that the walking (and inevitable running for a departing train) won’t spoil the striking new surface. 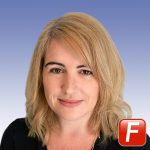 Ilona Osborne is the Marketing Manager at Flowcrete Australia - a leading manufacturer of seamless resin floor solutions. In this role Ilona leads the regional marketing efforts in Australia and New Zealand to engage with construction professionals and to provide them with insights and information on resin flooring.