One of the important factors of the Mondéco range is its design versatility, which makes it possible to create mesmerising, vibrantly coloured floors in bespoke patterns with this seamless resin terrazzo system.

To test its design capability, Flowcrete South Africa’s R&D Technician Ibraaheem Latiff was given the task of trying out a new technique to create patterns using Mondéco Earth. The most common way of fabricating a pattern in the epoxy terrazzo screed is to use flexible aluminium strips, however in this case Ibraaheem used polystyrene to see how effective it would be in producing a working design.

He applied the Mondéco Earth into the ‘star’ making sure it was filled completely, including into the sharp corners.

The result is a stunning design created using an inexpensive template. This exercise once again highlighted the enormous amount of possibilities that the Mondéco system provides architects and interior designers with to fashion unique, patterned epoxy terrazzo floor finishes. 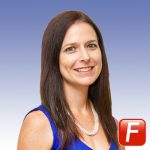 Verity Hunter is the Marketing Manager at Flowcrete South Africa - a leading manufacturer of seamless resin floor solutions. In this role Verity leads the African regional marketing efforts to engage with construction professionals and to provide them with insights and information on resin flooring.