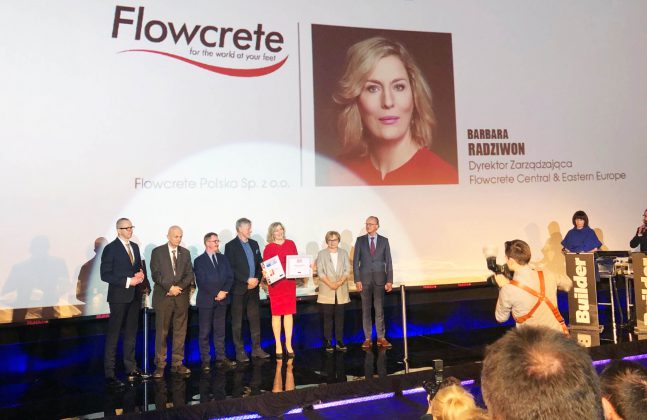 Every year Poland’s construction industry gathers to celebrate the best of its achievements from the past year at the annual Builder Awards Gala, and this year flooring was given centre stage! The awards by Builder magazine, held at Warsaw’s Multikino Złote Tarasy, are aimed at identifying the outstanding companies and people that really made the past year in building something special.

2017 in summary for the Polish construction industry was something of a mixed bag, with business indictors remaining positive but with a number of demanding market conditions (such as a lack of employees and high levels of competition) creating a challenging environment. This made it all the more important to highlight the leaders and the businesses that are embracing best practise procedures and that are setting the benchmarks for the industry.

At the gala, Builder indicated those among the nation’s companies that passed the market test the best, which included a long list of entrepreneurs, pioneers and innovators.  In fact, 50 companies were awarded with a Construction Company of the Year award in recognition of their product quality, customer service, standards compliance and achievements.

The full list of award winners can be found here.

We’d like to congratulate everyone that walked away with an award and we hope all their 2018’s are as amazing as their 2017’s!

Agnieszka is an architectural expert at Flowcrete Polska, which is a leading resin flooring manufacturer based in Warsaw, Poland.