Home / How to Identify Concrete Failure 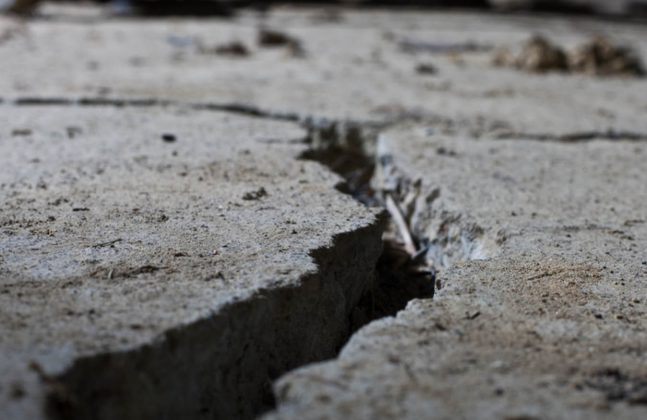 How to Identify Concrete Failure

Reinforced concrete might appear solid and unwavering, but without due care and attention it can easily crumble, crack and collapse. This is why it is so important to know how to identify concrete failure issues – especially when you consider the fact that most buildings, bridges, factories and facilities are predominantly concrete! 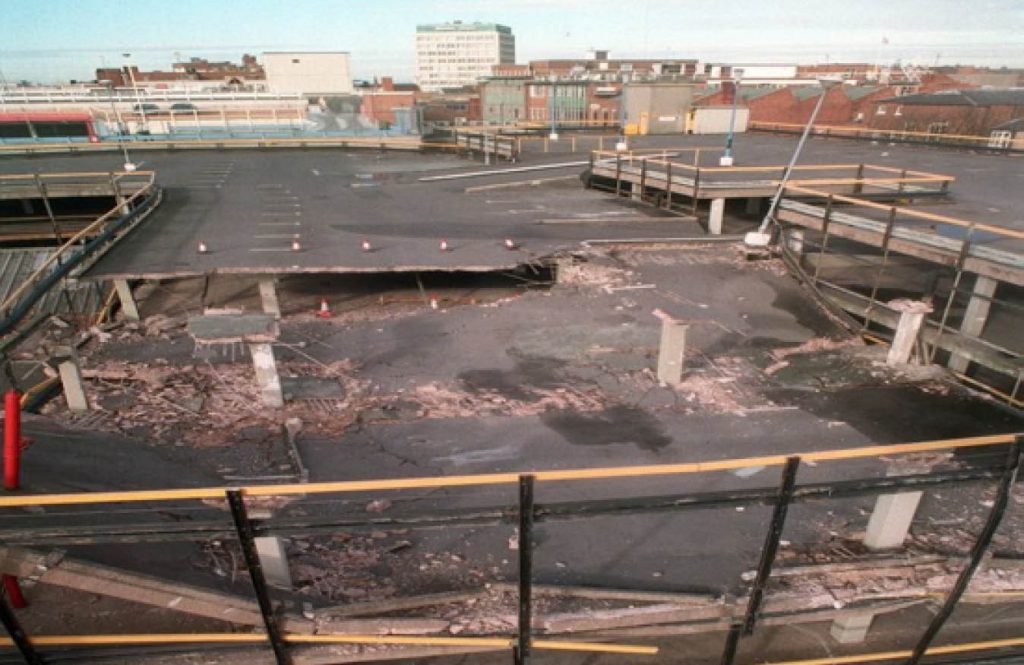 Concrete failure can lead to some pretty big problems!

Despite its durability, concrete can be damaged and degraded by a long list of factors. To name just a few…

One of the main causes for concern is corrosion of the steel within the concrete. This is such a big problem because rust can easily occupy ten times the volume of steel, which creates significant tensile stresses and leads to cracking, staining and spalling.

An insight into how rust breaks apart concrete structures

This can be a difficult issue to avoid, as corrosion is an entirely natural process. All that’s happening is the steel is attempting to return from an artificial state to the more stable state of iron ore (which is what it started out life as before being refined, smelted and deprived of oxygen).

And there are a number of inescapable environmental issues that can kick start and exacerbate corrosion issues. Not only will the wind, sun and rain all play a role, but so too will the water table, internal moisture from kitchens and bathrooms as well as heat, light and power emanating from the building. These factors need to be understood on a case-by-case basis, as each structure has a number of micro-climates acting upon it

The two most common causes of failure are carbonation and chloride contamination of the concrete. Both of these lead to corrosion of the embedded steel reinforcement and as the steel corrodes it expands and exerts pressure on the concrete so that, eventually, the concrete cracks and spalls.

Carbonation is the process whereby the natural alkalinity within the concrete is lost.  This is caused by the ingress of acid gases, principally CO2, from the atmosphere.

When steel is cast into fresh concrete it is cast into a highly alkaline environment. As the concrete sets, a passivating layer of iron oxide forms around the rebar effectively protecting it from corrosion. Problems occur when the alkalinity of the surrounding concrete is lost, i.e. when the concrete becomes carbonated. When the carbonation front reaches the rebar, the passive layer is broken down and the steel will corrode if sufficient oxygen and moisture are present.

The extent to which carbonation is a problem on any particular structure is down to a number of factors, such as:

The other major cause of reinforcement corrosion is chloride attack. Chloride may be present in the concrete because it was cast into the concrete as an accelerator, because it has entered the concrete via the use of de-icing salts or from a chloride rich coastal environment.

Once chloride ions have reached the steel in sufficient quantity they can initiate corrosion cells, even in alkaline concrete. Chloride attack causes localised heavy pitting of the reinforcing steel and as result it is, in some ways, more insidious than carbonation induced corrosion as it can result in severe loss of section and potential loss of structural integrity.

An example of pitting and corrosion caused by chloride attack

Again, the extent to which chlorides are a problem can depend very much on the quality of the concrete, the cover over the steel, and the exposure of the structure.

Corrosion is a predictable process and, unless treated, will always follow the same stages. So, look out for…

Stage 1: Initially, despite the fact that aggressive agents are entering the concrete, it appears to be sound with relatively little cracking and no ‘rusty’ discoloration from corrosion product formation.

Stage 2: The corrosive agents have reached the steel surface and corrosion has begun. Some macroscopic cracks have appeared and the concrete surface is stained by reddish corrosion byproducts. 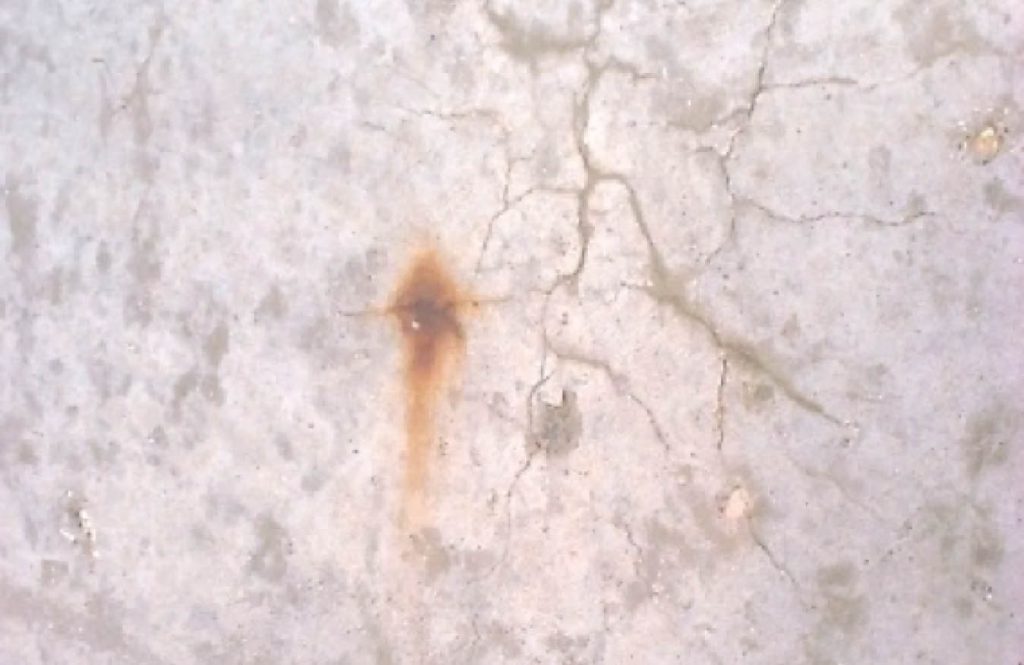 Stage 3: Spalling of the concrete covering the reinforcing steel is starting to become clearly visible due to the buildup of corrosion byproducts causing the concrete to breakdown and fragment.

Once you’ve spotted the tell-tale signs of corrosion the next step is to diagnose exactly what’s causing it. There are a number of different tests that can be run to try and pinpoint the problem.

If you suspect that chlorides are the culprit, then this is normally checked by titration tests and using QuanTabs. If there is more chloride present in the concrete than there really should be then this will get flagged up. Only a very small amount of chloride needs to be present in the concrete to make corrosion likely. Chloride readings can be checked against BRE guidelines but in general, if chlorides exceed 0.4% by weight of cement at the depth of steel, there is a risk of on-going corrosion.

The test for carbonation involves the very fun word “phenolphthalein” which is a dye that changes colour depending on the pH of the concrete. When applied to a fresh fracture in the concrete the indicator solution will change colour, if it turns purple then the pH is above 8.6. Where the solution remains colourless the pH of the concrete is below 8.6, which suggests carbonation. A fully-carbonated paste has a pH of about 8.4.

In practice, a pH of 8.6 may only give a faintly discernible slightly pink colour. A strong, immediate colour change to purple suggests a pH that is rather higher, perhaps pH 9 or 10. 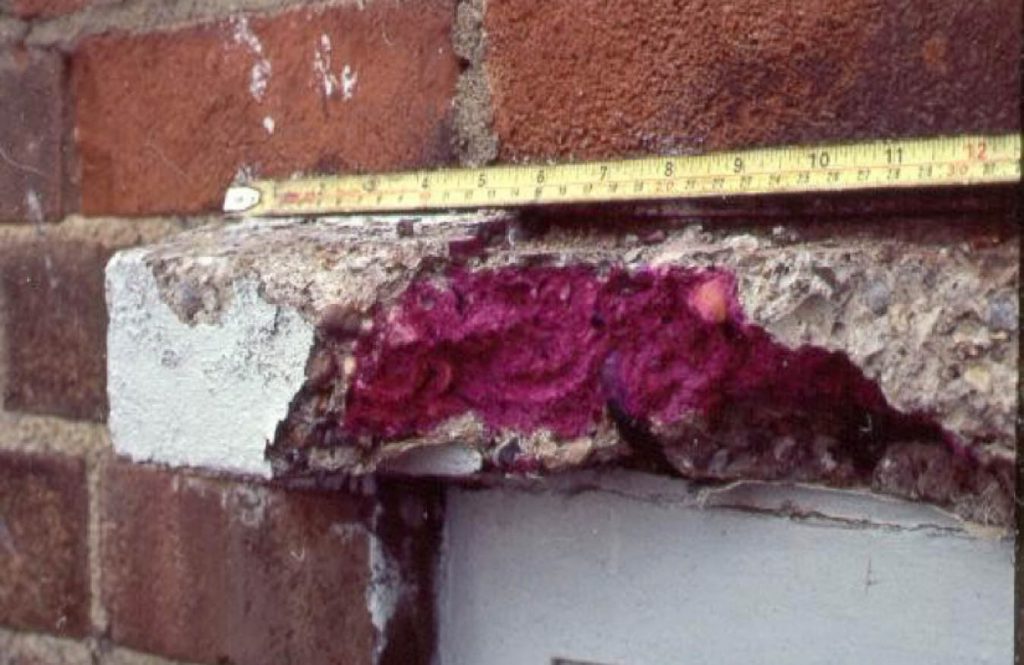 These two test will hopefully help to ascertain if the most common causes of corrosion have taken place. Otherwise there’s a whole host of other investigative techniques that can be employed to get to the bottom of the matter, such as:

We hope this has given you a good overview of the causes of concrete failure as well as how to identify and test for it. Over the coming weeks we’ll be continuing this theme with a blog on BS EN1504, the standard for the protection and repair of reinforced concrete, as well as a post on how to repair damaged concrete.